In 1885, when John Shaw Billings started the database which would, over time, morph into PubMed he recognized the hopelessness of trying to keep abreast of the medical literature.  In addition, he was cognizant of how trivial most of what passes for “the literature” is when he wrote:

There is a vast amount of effete and worthless material in the literature of medicine.  Our preparers of compilations and compendiums, big and little, acknowledged or not, are continually enlarging the collection, and for the most part with material that has been categorized as ‘superlatively middling, the quintessential extract of mediocrity.

Over the past 132 years, the situation has only gotten worse.  Today, the National Library of Medicine (NLM) receives 165 dermatology journals and indexes 57 of them in MEDLINE (searchable via PubMed).  What dermatologist could read all of these even if all one did was pore over skin journals?

We are starting a Virtual Journal Club for Dermatology.  Each month, members will post the one or two (or none) articles they deem most important from their assigned or chosen journals.  The references will be stored here for referral and open-access whenever possible.  The Label field can be used to locate articles of interest to readers.

Email ThisBlogThis!Share to TwitterShare to FacebookShare to Pinterest
Labels: About

Email ThisBlogThis!Share to TwitterShare to FacebookShare to Pinterest
Labels: journals

Abstract: With 30 years of clinical use, it is appropriate to review the use of isotretinoin.  The indications of isotretinoin have expanded from just acne and rosacea to a wide range of inflammatory and malignant skin disorders.   While the standard dose of 0.5 to 1 mg/kg per day for 4 months to a cumulative dose of 120–140 mg/kg per day has served us well in the management of acne vulgaris, there is emerging evidence that much lower dosages (as low as 5 mg/day) are just as effective but have significantly
fewer adverse effects. Relapse of acne vulgaris continues to be a problem but we are beginning to recognise that this is related less to the cumulative
dose and more to the length of sebaceous gland suppression. Other factors important for relapse includea macrocomedonal pattern of acne, smoking and age, both younger (under 14 years) and older (over 25 years).
After 30 years of use, we now understand why isotretinoin is such an effective drug. Not only does it clear acne in almost all patients, long-term remission can be achieved in 70–80% of patients with a single course. Important changes in the use of isotretinoin include using a lower daily dose for a longer period of time. New indications continue to emerge, particularly
as a potential treatment for both intrinsic and extrinsic (photo) aging. Teratogenicity however, remains a very significant concern.

There are times, every day, I need to swallow the urge to cry. And I need to keep telling myself that I'll be a good doctor. Maybe it's just a product of the place where I was raised. People there were unassuming, and usually kind at first meeting. Here there is no "Nice to meet you," there isn't even a chance to make a mistake. They assume you already have.

They have a way of making you feel worthless. Where they're coming from, or why they feel so superior, I don't know, but I think it's ironic. We work like slaves, get very little sleep, and have no formal didactic teaching on which to base our knowledge of the vast field of surgery. And if we don't perform well on standardized tests – there's no explaining - there's no help – there can be no suggestions. We just get degrading letters in our mailboxes about how poorly we have performed, encouraging us to get into a study program. Excuse me, but I thought that was supposed to be part of the residency!

This is supposed to be the Mecca of medicine – and probably the country’s most renowned medical city. You’d think they'd be proud to share their knowledge; after all, it's a "teaching institution." Well, they've taught me to feel afraid, worthless, ashamed, and often that I don't "deserve" to be a doctor. Physicians don't have the respect they once had. It's our own fault; we have demonized ourselves.

In two months I'll pack up and go home – by my own choice. I know that I am a good, caring doctor. But my self-worth and sense of competency have had to come from within. They've done everything they can to tear it down. This experience did not build character, strength, or "make a man" out of me. I am not and never will be one of the "good old boys." It has only given me many months of disappointment and sorrow. It is sad that people so bright and so famous have lost the ability to do a simple thing – to treat all people as equals. Someday we may all be in a situation where we can't handle the rejection anymore.


"This personal view generated a good many letters to JAMA. Some agreed with the author’s assessment of the often arduous training of surgeons at Harvard, and others, particularly faculty at Harvard Medical School, protested the singling out of their institution. The editors of JAMA stated that in publishing this article, "The Journal allows its readers to reach their own conclusions concerning the motives, balance, and accuracy of the piece."

Will You Forgive Me for Saving You?

I remember the day I first met you. It was a quiet Sunday, early in the morning. I heard a commotion out by the check-in desk, and your mom’s scream: “My baby’s not breathing!” The first time I saw you was in your mom’s arms. Heartbreakingly, you weren’t snuggled like a baby should be, or even limp. Your tiny body was twitching, seizing. The cold clinical term “decorticate posturing” that flashed in the physician part of my brain seemed too rigid to be applied to your chubby toddler arms.

This is a moving medical meditation.  Well worth reading.  NEJM has made it available FREE.

Comment of Brian Maurer, Pedicatric PA-C: Dr Torree McGowan’s moving piece “Will You Forgive Me For Saving You?” broaches the fine line between beneficence and malfeasance that clinicians who labor on the front lines in medical practice frequently face: when does medical intervention ultimately do more harm than good? As clinicians, we are trained to do everything in our power to save the life of a patient entrusted to our care, knowing full well that in some instances the ultimate outcome may be less than desirable, not only for the patient, but also for those whose lives will be burdened with her care for years to come. The pain that the clinician carries—call it survivor guilt—testifies to the heightened degree of moral distress experienced, distress that many times persists indefinitely. Hemingway once wrote that he “had gotten rid of a lot of things by writing about them.” That might be true for Dr McGowan in this case, though I suspect her clinician wound may prove to be a difficult one to heal.

Comment of Shay Bintliff, retired pediatrician and E.R. doc:
Having spent the first fifteen years of my medical career as a Pediatric Birth Defects specialist, then the next forty years as an Emergency Room specialist, I so identify with Dr. McGowen’s experience with this patient. Telling this very, and yes, sad special story from her heart  she shares her emotions without hesitation. She is able to share with readers the lessons that she will carry forth and pass on to others in her medical practice.  YES, our patients are our best teachers if only our hearts and minds are open to them. Dr. McGowan has learned this early in her career and I am one  of many who appreciate her sharing her story!!
at July 05, 2018 No comments:

Mass medicalisation is an iatrogenic catastrophe 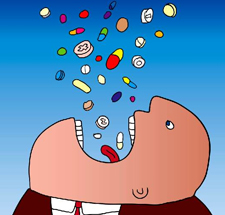 Profligate prescribing has brought a hidden epidemic of side effects and no benefit to most individuals.  [All of us who drift into physicians’ offices are subject to over-medicalization by overworked, ignorant, well-meaning, but  often autocratic, physicians. DJE]

Excerpts:
“Tis impossible to separate the chance of good from the risk of ill,” wrote David Hume presciently, anticipating, by 250 years, medicine’s current existential crisis. There is no drug or procedure with its “chance of good” that may not harm some. The more doctors do, the greater that risk. And doctors are certainly doing much more with, over the past 20 years, a dizzying fourfold rise in prescriptions for diabetes treatments, sevenfold for anti-hypertensives, and 20-fold for the cholesterol lowering statins.

There is a hidden epidemic of anxiety-producing symptoms such as fatigue,
muscular aches and pains, insomnia, and general decrepitude, a 75% rise in emergency admissions to hospital for adverse drug reactions.  Le Fanu feels that this was driven by sophistic public health research that played into the drug industry’s goal of mass medicalisation.

This ‘close alignment of the priorities of public health with the marketing practices of this most profitable of industries’ has been achieved by lowering the threshold for initiating treatment to include those whose physiological variables are only marginally elevated, if at all. The simple expedient of redefining diabetes, hypertension, and hypocholesteraemia in this way increased their prevalence in the US by, respectively, 14%, 35%, and 86% -- an additional 56 million cases, more than a third of the total adult population of 187 million.

The population was not “sick” after all, but has certainly been made sick by the iatrogenic consequences of that profligate prescribing.

How to Fix the Premed Curriculum

(This was written 40 years ago, and nothing has changed!)

PDF of How to Fix the Premedical Curriculum
Notes on article.
The influence of the modern medical school on liberal arts education in this country over the last decade has been baleful and malign, nothing less. The admission policies of the medical schools are at the root of the trouble. If something is not done quickly to change these policies all the joy of going to college will have been destroyed, not just for the growing majority of undergraduates who draw breath only to become doctors, but for everyone else, all the students and all the faculty as well.

Thomas states that the rhetoric of medical school catalogues is to major in non-science discipline as history, English and philosophy; even so, not many do. Pre-medical students didn't buy that line. [In 1978 they continued to concentrate on science. I don't see much difference today.]

The pre-medical students concentrate on science with a fury, and they live for grades. If there are courses in the humanities that can be taken without risk to class standing they will lineup for them, but they will not get into anything tough excepting science. The atmosphere of the liberal-arts college is being poisoned by pre-medical students. This is not the fault of the students. They behave as they do in the firm belief that if they behaved in any other way they won't get into a medical school.

Thomas suggests that any college maintaining offices for people called pre-medical advisers should be excluded from recognition by the medical schools.

Knowledge of literature and language ought to be the major test and the scariest. History should be tested with a rigor. Students should know that if they take summer work as volunteers in their local community hospitals, as ward aids or laboratory assistance, this activity will not necessarily be held against them, but neither will it help.

The first and most obvious beneficiaries of this new policy would be the college students themselves.  Society would be the ultimate beneficiary. We could then look forward to a generation of doctors who have learned as much as anyone can learn, in our colleges and universities, about how human beings have always lived out their lives.

In 1885, when John Shaw Billings started the database which would, over time, morph into PubMed he recognized the hopelessness o...

Humane Medicine Hui
We are a group of people who are interested in all humanistic aspects of health care.